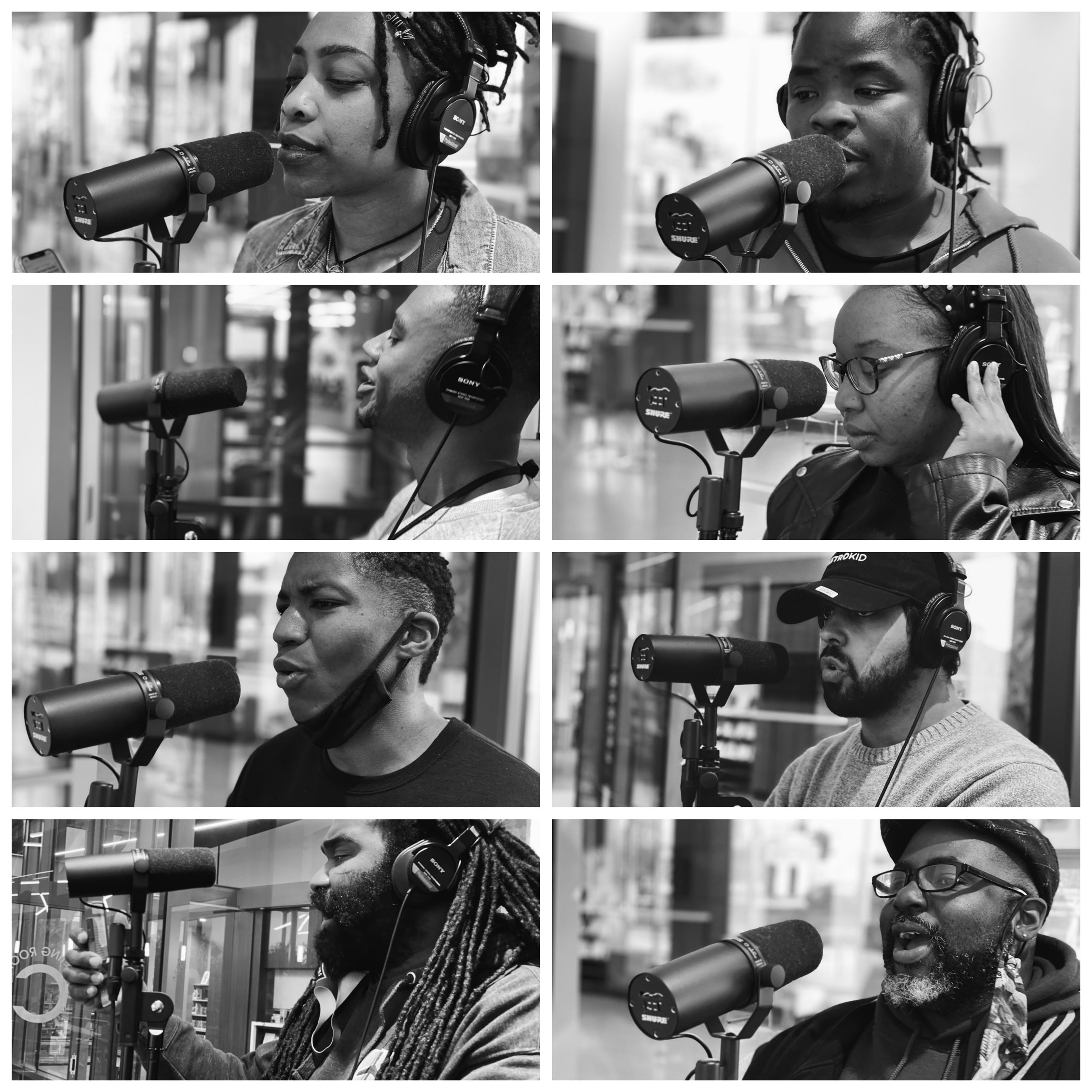 A collaboration of the Roanoke Public Libraries, the Roanoke Arts Commission, the Grandin Theatre, and the Feeding Southwest Virginia Community Solutions Center has led to the creation of the “We Are Art” rap cypher.

Want to do more in our community? Find local anti-racism resources here.

The project, led by Creative Director Macklyn Mosley, a Community Services Assistant with the Roanoke Public Libraries and a member of the Roanoke Arts Commission, is a celebration of black culture through a staple in the hip hop culture: rap cyphers. This cypher will feature local rappers Kahlil Alexander, Eboni Harrington, Dylan Dent, Dionte Hall, Bryan Hancock, Tyler Langhorn, Rich Miller and Laquisha Moore. Each artist wrote their own individual parts of the song, while the chorus is spoken in unison.

While we can’t gather around the tight circle of performers because of the pandemic, we can still celebrate their collaborative, creative spirit and send this affirmative, supportive message of our community through film.

Filming was conducted at the Grandin Theatre, and the film will include artwork by Antoinette Hale from the City’s public art collection, as well as books illustrated by Theodore Taylor III, a native of Roanoke. Chris Tribble of SnapKraklePop Photography led the creative direction of the filming, and Marc Rainey took photos. The music instrumental is by Andre Hairston, AKA AH Beats of Danville, and the mixing and mastering was handled by Cameron Hughes of Roanoke.

“The goal of this musical collaboration is to encourage Roanoke community members to know that the whole city is for all Roanokers,” said Sheila Umberger, Director of Libraries. “The hope of the artists and all the partners is that this cypher will help break down barriers while celebrating our many cultures.” For more information, contact Macklyn Mosley at macklyn.mosley@roanokeva.gov.

Eboni Harrington, a graduate of Norfolk State University, and Mathematics teacher at Lucy Addison Middle School. Prior to her position at Lucy Addison Middle School she was the Math Coach and classroom teacher at KIPP Halifax in Roanoke Rapids, NC for two years. Her career has afforded her the opportunity to build community relations, network, and empower the youth one day at a time.  Since 2015 Eboni has worked as an educator and mentor including spearheading a girl’s empowerment group, Apire to Inspi(HER), at Lucy Addison Middle. She is an advocate for education and youth empowerment. She uses her position to inspire the youth through wellness workshops, empowerment sessions with community leaders, and reinforcing what it means to create a positive self-image.  Community involvement has always played a pivotal role in how Eboni operates. She currently serves on the advisory committee for The Humble Hustle Company, Incorporated, a nonprofit in the community that thrives on the meaning of giving back. She is an active member of Alpha Kappa Alpha Sorority Incorporated, Beta Chi Omega Chapter. Ms. Harrington is eager to see the community thrive. She has recently launched a tutoring service, So Math About, a mathematically driven program designed to encourage a student’s self-confidence, mathematical skill set, and outlook on the world by using real word applications.  Eboni is proud to teach students to be involved, active learners and listeners, and how to think critically and creatively. She emphasizes high expectations for all students and supports them to reach their full potential.  She is humbled by her life experiences and hopes to continue to work and serve in her hometown while inspiring children one classroom at a time.

Dylan Dent is a rapper, producer, and singer/songwriter based in Roanoke. He has been working in his craft for the past 4 years. It is his goal to comfort and encourage the world and remind us not to limit ourselves. Read more in “Roanoke according to Dylan Dent” in the Jan. 20 Roanoker.

I go by taye the truth, I fell in love with hip hop as a kid when I heard my uncle create music in his home studio. I wrote my first sixteen my senior year in high school in 2009 as a project in my history of hip class. I see hip hop as a vehicle for self expression and story telling and I want to change the narrative of how people view this beautiful art form.

Bryan  “Harvest Blaque” Hancock is an actor, Slam poet and Hip-Hop Performer. Bryan works at The Jefferson Center music lab as there lead Hip-Hop studies teacher. His acting credits include the webseries”Tuned Out T.V.” and Showtimers production of “12 Angry Men”, Hollins Playwright’s festival “Pheromones”. He is currently a cast member of The Big Lick Conspiracy Comedy Troupe. Harvest also is the Host/ Curator of the bi-weekly poetry show Soul Sessions. For 7 years Soul Sessions has been the peaceful,creative hub for all walks of life. Soul Sessions is an open space for one to let their soul be free and their voice be heard through open mic poetry. We are housed in Morning Brew Coffee located 110 Salem Ave SE Roanoke,Va.. Harvest has worked on his craft as a performance artist/emcee and is also known for his underground mixtapes “Stress As A Weapon” Vol 1&2. Harvest Blaque is the front man for the award winning Harvest Blaque&Co. who has done exceptionally well with their EP’ RELIEF’. He will be releasing his solo Album “Mind Scrub” later this winter.

TyTylerTy, aka Tyler James, is a poet and rapper from Roanoke, Virginia. He’s been recording and performing poetry and music since he was 15 years old. His passion in life is people, showing love and kindness, and doing his best to make life better for others – whether that be through art, encouragement, or kindness.

Rich Milz formerly known as “Thrillz” was born in Orlando Florida, currently he resides in Roanoke Virginia where he decided to take his music career seriously. Rich is a Hip Hop artist with a conscious, down-south, trap and new school rap style. He seeks to motivate listeners to be who God made them to be and never give up despite adversity. An introspective and transparent artist, passionately ambitious to speak introspectively about how his faith intersects daily life.

Rich started recording at 14 but recently has taken his passion for music to the next level. June 26th 2020 marked the beginning of music released by ‘Rich Milz’ with his first single ‘Thank You’, a song for everyone that helped invest financially in his dream to pursue music. His biggest performance was with DJ Pdogg at UNC Chapel Hill. He has done many other local shows and has also shared the stage with the Culture Villains. Currently he’s promoting his debut EP release titled ‘Thank You’ and working on new music as well! He says, “Ultimately I want to build a platform that glorifies God through the talent given me and to shine His light in the darkest of places. The music I release is meant to be brutally honest and introspective for the sake of being relatable and showing all the struggles of a man that falls forward constantly in his pursuit of God.

Laquisha “Ann Artist” Moore is an emcee & singer-songwriter from Roanoke, Virginia. Independently – Ann Artist released her debut E.P. in 2018 titled “Peaces of Ann Artist and since then has released several singles under the PUSH Audio team that she collaborates with frequently, based out of California.   Ann Artist has opened for several celebrity artist locally, has attended the annual Roanoke’s  Got Talent showcase,  and recently received the “female artist of the year” award in 2019.  Ann has said that she draws inspiration from artist such as, J Cole, OutKast and Ari Lennox. Her sound has been described as catchy rhythmic r&b and bounce vibes